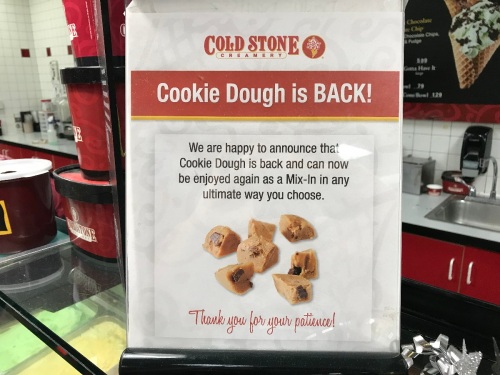 Apparently, some time between my recent visit to Cold Stone and the last time before that, there was a period where they did not serve cookie dough as a topping.  Which on one hand is a shame, since I pretty much always get cookie dough as a topping there (yes, yes, judge away), but on the other, could just mean that I have good timing when it comes to ice cream.

I almost took this seemingly reasonable and informative sign in stride until I noticed the hilariously unnecessary use of the word ‘ultimate’.  It’s as though the sign-writer got most of the way through the sign before suddenly realizing that it was wasting the opportunity to remind everyone of how amazing and hardcore ice cream is, and so hurriedly applied an arbitrary buzzword to something mundane and called it a day.

So there I am, awkwardly cracking up in the ice cream line in a pretty ultimate way.  You know how it is. 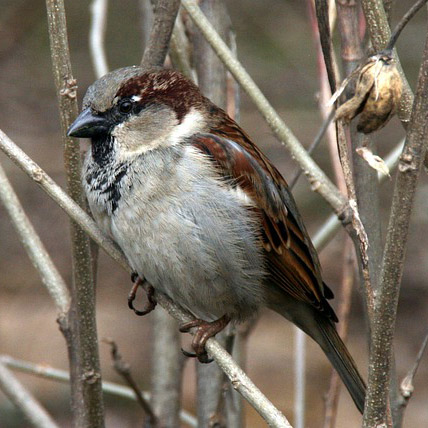 It was a Sunday full of wine and sprinkles for all but the poor and the poorly, and the animals in the forest rejoiced but for a grumpy little sparrow who fluttered about, searching for some sweet, sweet white to abate his surly demeanor.

“Sir Sparrow!” called a canary from a branch above.  “Why so somber on such a beautiful day?”

The sparrow settled on another branch.  “It is a medium day at best – at the very best – and, if you must know, I’ve had not a bite to eat for its entirety.”

“Ah, well, there are some crickets in the underbrush just east of here!”

The sparrow glowered.  “I’ve had my fill of cricket.  Begone with your sunny feathers and lackluster suggestions.”

“Suit yourself, then!”  The canary took her leave.

It was in that moment that the sparrow noticed a leaf to his left of precisely the wrong shade of yellow-green.  Properly offended, he bent down and plucked the unsightly thing from his perch.  Doing so, however, created an imbalance with the other side of the branch, so he plucked a second leaf to even things out.

Please do not remove all of my leaves, Mr. Sparrow, said the tree in a language made of rustles.  I need them to photosynthesize.

The sparrow pecked the tree in irritation, then took to the air.  But in his haste to be on with his search, he neglected to pay sufficient mind to overhead clearance, and promptly bonked his head upon a higher branch and plummeted to the earth below.

He awoke sometime later to the gentle shake of a thin brown squirrel.  “Are you all right?” asked the squirrel, nosing him when he stirred.  “Come on – let’s get you up before a fox comes around and spots you like this.”

The sparrow hopped to his feet and stretched out his wings, which felt intact.  “I’m fine.  I was merely seeing what it must feel like to be one of those stupid birds who falls to the ground for no good reason at all.  To see if I could better sympathize with them, you understand.”

The squirrel’s eyes brightened and he clapped his paws together.  “Oh!  You’re in luck!  I have a big pile of it in my tree.”  He gestured to a knothole in a nearby oak.  “I’ll tell you what – if you help me gather a couple of the hard-to-reach acorns up there, you can have as much of it as you want!”

The sparrow considered this for a moment, and then ended the squirrel’s life.

Slipping into the oak, the sparrow instantly noticed the heap of glorious snowy powder tucked away in one corner of the hole.  Wasting not another moment, he thrust his beak into it, but then immediately recoiled.

The sparrow puffed up, pregnant with rage, for it was not sugar at all, but saccharin – a devious impostor created by man.  He knew this, for as well as grumpy he was a clever sparrow.  In fact, a human child had once tried to feed him saccharin.  A child who had concluded that day with fewer fingers than she had begun it.

The sparrow thwacked the atrocious substance with a wing, sending up a billow of grievous white dust which settled upon his feathers.

A squirrel was a low-quality creature, he reminded himself.