There’s a classy new(-ish) place in Meridian that I’ve been going to lately, consisting of a movie theater reminiscent of a fancy Las Vegas hotel, an always welcome array of new restaurants, and a large chunk of real estate wasted on a disappointing overabundance of hipster clothing stores.

I thought the main courtyard was snazzy enough to provide an excuse for a wide shot.  Should have moved the camera more slowly, though…

Or maybe it’s just that my mind is too frazzled to say anything interesting this week.  (>^-‘)> 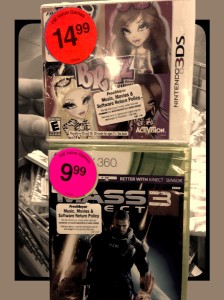 The numbers herein
Tell a harrowing story.
Behold them and weep.

Just wanted to pass the word along that my good pal Shauna Scheets is offering the current Caillte Saíocht books (The Tower of Boran and its prequel, Ascha) and her short story “Mirrored Worlds” for free on Kindle today through Monday (6-16-14).

If you haven’t checked them out, yet, here’s the perfect chance!

A Facebook post I came across yesterday prompted an interesting discussion that I thought I’d entertain here.  An author had posted a photograph of a proof copy of his novel, and I happened to notice that the cover artist’s signature was on the cover itself.  I pointed out that such a thing is a bit tacky from a professional standpoint, and recommended asking the artist to provide a clean copy.  Other commenters, however, cast their voice in favor of the practice, asserting that the artist deserves credit.  Some went so far as to claim that it was normal (I assure you, it isn’t.  (>^-‘)> ).

Cover artists most certainly deserve recognition for their awesome work, and the appropriate place to ascribe credit is the colophon (i.e., copyright page), particularly when most artists’ imprints aren’t exactly the clearest way to read their name.  The artist has every right to sign display and standalone copies of the artwork in question, but the actual cover is production material, which is no place for embedded autographs.  Can you imagine, for instance, watching an animated film in which the contributing artists had overtly signed each cell they worked on in-frame?

It strikes me as an insecure and amateur move that needlessly diverts attention to the artist’s self, rather than letting the work stand as a representation of the story and author for which it was commissioned.  As an editor, I don’t require credit at all, let alone to sign the footers of every page I touch and point out which sentences are mine in the finished book.  As a composer, I don’t whisper my name at the end of tracks I provide for a film.  Even as an author, I don’t stamp my name within the narrative itself.  Again, as artists we are definitely entitled to credit for the work we do, but credit should go where credit goes, and art – particularly production art created for someone else – should be allowed to shine unblemished by our desire for recognition.

(As an aside, I should note that I’m excluding such instances where the artist seamlessly weaves his or her imprint into the image itself, at which point, as attention-seeking as it may still have the potential to be, it should be judged for its own artistic merit rather than at this external level.)

But this is just my take.  If you’re an author, how would you feel if your publisher or cover designer handed you a proof with the artist’s name on the cover alongside your own?  If you’re an artist, do you feel there’s a case to be made for autographing the work you provide for another’s project?