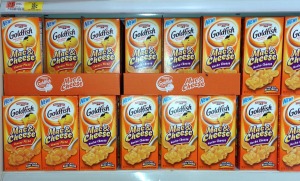 I suppose I should start by saying that I’m not a big fan of dry-box macaroni and cheese (really, Stouffer’s frozen stuff is the only pre-made kind of any sort I find to be worthwhile).  The other day at the grocery, however, I saw that Pepperidge Farm had decided to throw its hat into the game, and at that very moment I was apparently hungry enough to think, “Hey, Pepperidge Farm makes some really good stuff (mmm, Milanos), so this might actually be decent!”  It was a long day, and Goldfish Crackers in creamy pasta-y form sounded kind of good, all right?

Anyway, I was feeling adventurous enough to try the “pizza” kind, so I whipped up a batch thereof.  The smell…was frightening.

And then…and then I tasted it.

Now, I don’t know in whose mind this substance could taste like pizza.  Or cheese.  Or food, for that matter.  No, the flavor was more akin to dark, tangy, bitter misery.  To wit, if you were to subtractively combine Top Ramen with Totino’s party pizzas, this would taste cheaper still.  I tried to drown it out with pepper and garlic, but even so I was only able to stomach a few bites before throwing the rest away – something I am typically loath to do with any food, no matter how inexpensive.

But as those few bites sat upon my tongue, I found myself wondering who “Goldfish Mac & Cheese” could possibly be for, as I was unable to imagine any person who would simultaneously actually exist and enjoy its taste.  Even if I were to expand my consideration to theoretical people, and the basis for one such theoretical person (from which all other characteristics were derived) proposes that he is someone who would enjoy “Goldfish Mac & Cheese”, I can only conclude that he would also hate it.  It just made me angry at food in general for the rest of the day.

So I guess all I’m really trying to say is that, if you happen to find yourself in a position where you might consider putting Pepperidge Farm’s “Goldfish Mac & Cheese” into your body, well, you’ve just got to not do it, that’s all.