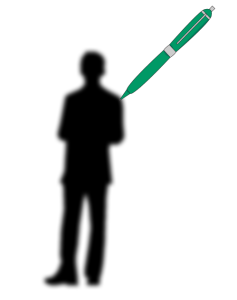 The other day, I encountered a conversation on Facebook prompted by a question on how best to describe the main character of a book, and when several responses amounted to “don’t”, I figured it was a topic worth discussing further.

Descriptive minimalism is all the rage these days – and don’t get me wrong, I hardly yearn for a return to multi-page-long tangents of flowery irrelevance – but I always find my reader side irritated when an author can’t be bothered to describe the protagonist without a thematic reason not to do so.  In short stories, sure, it’s not so big of a deal, as they’re usually more about ideas than characters, but if you’re going to have me follow someone for an entire novel, at least give me a clue as to whom I should be picturing. I can fill in the blank, but it’ll probably be with something pretty stock, and I’m reading for a glimpse into your imagination, not mine.

Physical appearance should certainly take a back seat to personality and actions as far as defining a character, but it’s still an avenue for interesting subtext, and something worth taking advantage of.  Personal imagery is a powerful thing; we’re visually oriented and strongly wired to pay it mind.  Let your readers make assumptions about how characters might act based on what they look like, then challenge or confirm them as you see fit – a motif equally applicable to reality.  Forcing your readers to assume what characters look like based on how they act is something that doesn’t make sense outside the context of a story – assuming the characters interact with others and aren’t invisible.

As to the how of the original question, there are plenty of non-intrusive methods to describe a character.  As long as the narrative isn’t strictly perspectivized (and the perspective has no reason to draw attention to it), there’s nothing wrong with a simple declarative sentence or two: “He was a short, tan, and lumpy fellow, not unlike a potato.”  Sprinkling adjectives onto actions (“She tied back her long, brown tresses”) or using dialogue from others (“Aren’t you a little too tall for that?”) are quick and seamless.  Even reflections, as tropey as they are, are a natural way to bring up appearance within the bounds of the narrative if the perspective character is self-critical, vain, or recently changed in some way.

All of that said, though, this is one of those things that ultimately comes down to a matter of personal preference.  So, as a reader (and/or writer), what’s yours?