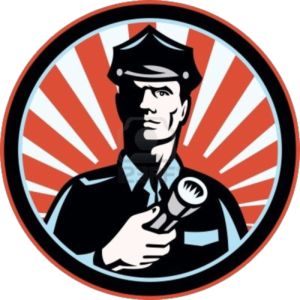 Oh, homonyms and homophones.  They let us construct statements such as the above (which, while a ridiculous thing to say, is a perfectly valid English sentence that could be rephrased as “Cops that are regulated by other officers regulate cops that are also regulated by other officers.”).  If you want some extra-specific vocabulary, the noun ‘police’ and the verb ‘police’ are polysemes.

Maybe it’s just me, but I find something inherently humorous about legitimately using the same word (and to a lesser extent, letter) too many times in a row.  You can almost feel the language glaring hatefully at you, like a cop (that may or may not be regulated by other cops) watching a criminal get away on a technicality.

Perhaps the craziest exercise in homophony, however, is the Chinese ‘poem’/riddle by linguist Yuen Ren Chao entitled 施氏食獅史 (usually called “Lion-Eating Poet in the Stone Den” in English).

In its written form, it’s understandable enough (if you know Chinese, anyway):

But, when read aloud in (or transliterated from) Mandarin, it becomes practically incomprehensible:

It’s not perfectly homophonic because of tonal distinctions, but still.  (>^-‘)>  There’s a bit more variation when spoken in the other dialects that use the Chinese ideography (like Cantonese or Taiwanese), but either way, it’s really only followable in writing.

Languages are generally engineered to be as clear as possible, and where they fall short of that goal is something a writer should keep in mind – plus, abusing those problem areas can produce some entertaining results!

6 responses to “Lion-Eating Poet in the Stone Den”